Extra carrying capacity in our cars is usually something we only need on holidays and high days. So rather than buying a bigger car or an estate, when you don’t need the added space for 50 weeks of the year, why not invest in a roof box?

These are streamlined cases that mount on roof bars attached to the top of your car. And for a few hundred pounds they’ll effectively double your car’s carrying capacity. But buying one can be a complicated business. That’s why we asked Martin Gray from the Roof Box Company for his advice.

A roof box’s life is a hard one. They’re exposed to air and the elements rushing by at motorway speeds, and they’re frequently expected to carry heavy loads. On top of that, they’re regularly lifted on and off cars and possibly stored without much care or consideration.

Martin Gray said: “The difference between a cheaply built one and a high quality box is between £25 and £50. For that, you will get something that should last for years compared with one that may start to fall apart after just a few weeks of use.”

The shape of things to come?

When you’re considering the shape of a roof box, think about whether you want space at the side for a bike carrier or skis. Gray explained: “The most common mistake people make is not buying the right kind of box to maximise the space on the roof of their car.”

Roof boxes come in a variety of shapes and sizes:

How big is big?

Think about what you want to carry in your roof box. A well-designed box that has 400 litres of capacity will be more useful than one of the same size but with awkward angles and a very narrow front edge. Rather than the manufacturer’s declared volume (which have been known to be inaccurate) check a roof box’s length and width and consider what you’ll be carrying in it.

The type of plastic the box is made from is important. You want a roof box to be sturdy with strong fittings. The last thing you want is for it to detach from the roof bars because a component has failed.

Equally, cheaper boxes don’t cost much because they’re made of poor quality materials. Thin plastic can flex when loaded up which makes closing the box tricky. As they gradually deform, they’ll start to rattle the older they get. And the thinner and more brittle the plastic, the easier they’ll be to break into. 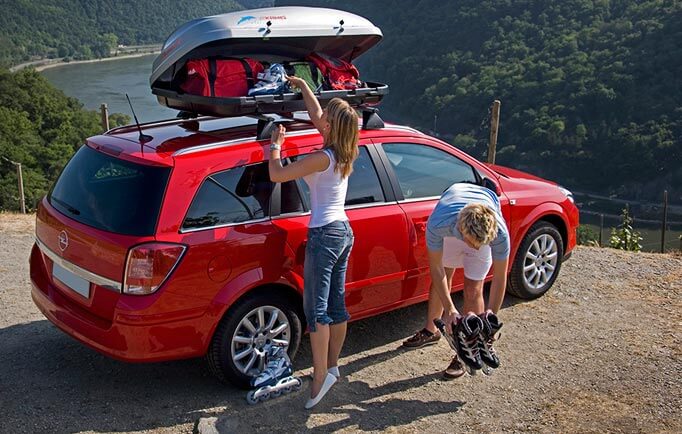 Depending on the size of box you get, the side it opens on is going to be important. Boxes can open on one side or the other and some have a dual opening mechanism. Ideally you don’t want to have to stand on the traffic side to lift stuff out of the box. Equally, there might be something about where you park at home that prevents you using one side.

How the box locks is important too. Gray told us: “Some have central locking which sounds like a sensible idea. In practice, if the box is full, you might struggle to engage one of the locks. Then you’ll need someone else to help which might be a pain.”

Ask your supplier about fitting and, if possible, have a look at the mechanism that attaches the roof box to the roof bars. Martin Gray said: “The ‘quick fit’ systems frequently trumpeted by some makers are often no quicker than regular systems. And if you’re only planning on fitting the roof box twice a year, is a slightly fiddly fitting a problem anyway? Ideally you need to figure all this out before buying.”

Modern roof boxes should be almost silent when you’re on the road. The roof bars will lift them high enough off the roof to ensure there’s no whistling beneath them. But make sure that, although streamlined, they’re still practical. “Looks are important,” Gray said. “One that looks stylish now should still look good in 10 years’ time.”

Where to get a roof box from

If you go to the franchised dealer for your make of car, they’ll be delighted to sell you roof bars and a box to go with them. These are likely to be rebranded versions of big name manufacturer boxes with a price mark-up. They have been known to be old-fashioned too. It makes sense to see what’s on offer from a motor retailer or a specialist website first.