What is a crash for cash scam? How do they work? Who’s being targeted? How can they be spotted? What can you do about them? Read our guide to ensure you’re not the latest victim.

Just when you think you’ve seen it all, another variation on a scam rears its ugly head. In addition to causing car crashes so that they can make car insurance claims, criminals are now trying to extort cash from their innocent victims at the scene of the crime.

Crash for cash is big business. Last year, the Insurance Fraud Bureau (IFB) charged 87 people in a single gang. The IFB estimates that this gang’s 28 claims for rigged ‘accidents’ cost the insurance industry £763,068. Ben Fletcher, director of the IFB, said: “Crash for cash scams have a real impact on society, putting the lives of innocent people at risk and costing honest policy holders almost £350 million each year.”

What is a crash for cash scam?

In the majority of accidents where one car hits another from the rear, it’s the car behind that is deemed the guilty party. Criminals take advantage of this by giving the driver behind no option but to hit the car in front. They cause the accident in a number of ways, including pulling away then jamming on their brakes; working in conjunction with another driver in front of them who brakes suddenly then speeds away; or disabling their brake lights to cause the car behind to run into them.

Who are the victims?

As is the way with criminals, they target vulnerable drivers; people who don’t want to cause any trouble or who are under time pressure so they don’t ask too many questions. Those most at risk tend to be elderly drivers or young mums with kids in the car. According to the IFB, the most common locations for crash for cash scams are Birmingham, Bradford and Bolton. The problem is becoming so serious that the IFB says seven out of 10 drivers are concerned about being caught up in one of these ‘accidents’.

The IFB says the crash for crash fraudster will be far too calm for someone who’s been involved in a car accident.

Anyone involved in an accident is usually shocked. Genuine accident victims may be irritated or perhaps excitable and they could be unsure what happens next.

A scammer will probably have already written down their insurance details or certainly have them close at hand. And if there are any injuries, they will be far more serious than the force of the impact might suggest. 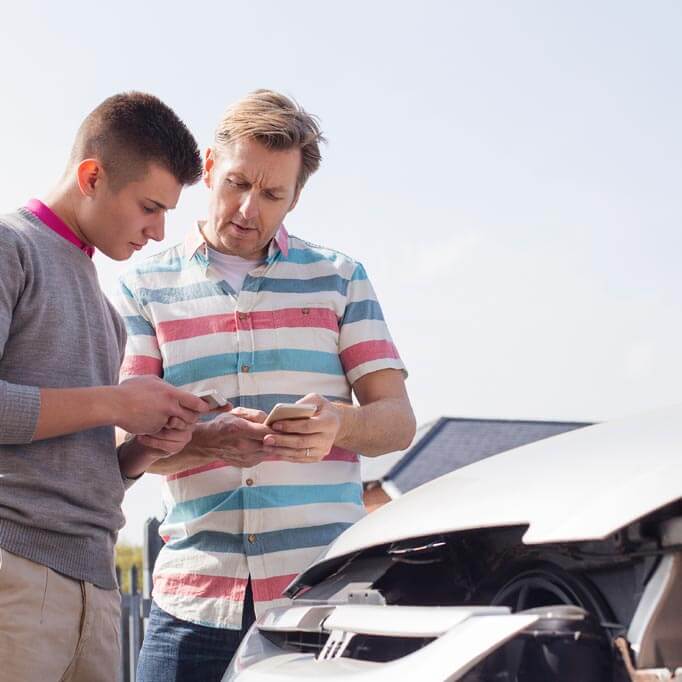 How does on-the-spot crash for cash work?

Frequently, the fraudster’s car will have three or four passengers, all of whom will get out of the car rubbing their necks and claiming to be suffering from a hard-to-prove whiplash injury. They will then put in a hefty claim against the innocent driver’s insurance. And that will mean your insurance premium will increase. The latest variation on the scam is when fraudsters suggest you pay them off to keep quiet. They may even be kind enough to give you a lift to the cash point. They’ll then make an over-inflated claim to their insurer anyway.

How do you combat crash for cash?

Dashcams help immeasurably. Between 2014 and 2015, sales of dashboard-mounted cameras increased by 918%. If you don’t have a dashcam and you are involved in a crash, look around for CCTV cameras. If there are some, you may be able to obtain the footage to show that you weren’t actually at fault. Sadly, many fraudsters have already thought of this and stage their crashes where there isn’t any CCTV. If that’s the case, look for witnesses.

It is imperative that you record as many details as possible. This includes the other driver’s name, address, phone number and the registration number, make and model of their car. Also, ask to see their driving licence. Don’t admit fault for the accident and take a photograph of the other car and the people in it so that they can’t later claim for passengers who weren’t present. Photos and ID checks also help identify repeat offenders and trace their true identities.

If you’re suspicious about the circumstances of the crash, call the police and tell them.