Modern cars have dashboards packed with dials and an array of warning lights just waiting to switch on and confuse hapless drivers.

Usually, these warning lights aren’t a cause for concern, as they’ll go out once the engine’s running. But should they ever turn on during driving, you need to know what they mean, as some can indicate serious trouble.

The lights are coloured red, orange/amber or green, and work much like a traffic light system. Red is the equivalent of stop, and means the problem needs investigating immediately; orange or amber is an advisory signal, suggesting drivers will need to take action; and green says all is clear and serves as a helpful reminder.

Here’s a helpful guide to the most common dashboard warning lights.

Red dashboard warning lights - what do they mean?

This red light may appear to be a picture of a passenger balancing a beachball on their lap, but it means that one of the airbags is malfunctioning. This is a serious matter, as it could fail to inflate in the event of an accident, or worse still, inflate without warning while you’re driving. 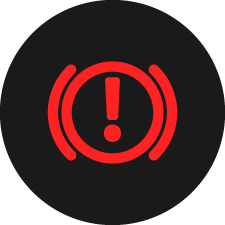 The first thing to do if you see this symbol glowing on the dashboard is check the handbrake hasn’t been left on. Assuming it hasn’t, there is a fault with the brake system. That could relate to the worn condition of the brake pads or discs, a lack of fluid in the system or a problem with the anti-lock brakes (ABS) or stability control (ESP). Have it investigated by a garage as soon as possible. 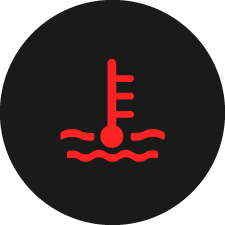 To keep their cool, nearly all cars pump coolant fluid around their engines. If this warning light turns on, that coolant level could be dangerously low, or a blockage in the system could be causing the engine to overheat. Call out your breakdown provider or seek immediate assistance at the nearest garage. 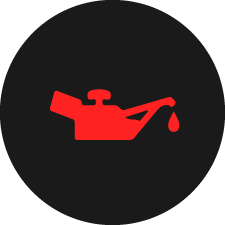 This generally tells drivers that the engine has lost oil pressure or is crying out for a top-up of oil. If you can’t remember the last time you checked the oil level, or had it changed at a garage, there’s a good chance it’s now at a dangerously low level – which could cause serious damage. So pull in to the nearest petrol station or garage, consult the vehicle handbook and check the engine’s oil level. The handbook will advise which type of oil is needed for a top-up. 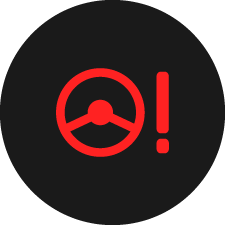 Most of us would struggle to turn a steering wheel if a car didn’t have what’s known as power assistance. This is a hydraulic or, increasingly, electric pump that helps turn the steering. So when the warning light for the system illuminates, take it seriously and have it checked out by a professional. 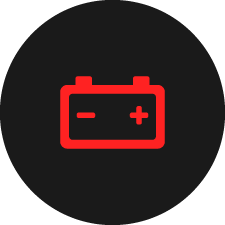 The most likely cause of a red light with a battery symbol is that the car battery is no longer charging, or something is draining the charge when the car is parked and switched off. A flat battery is one of the most common causes for breakdown technicians being called out. So if the light comes on, your car will need further examination.

Usually, an amber steering lock symbol will indicate that the car’s steering lock needs to be released before the engine can be started. But if it remains red after starting the motor, it suggests there is a malfunction with the mechanism. In that case, don’t switch off the engine and head to a garage to have it inspected. 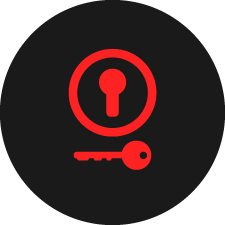 With myriad electronic systems involved in the smooth running of the modern car, the ignition switch warning symbol could indicate all manner of maladies. So have the car checked over as soon as is practically possible.

Orange/amber dashboard warning lights - what do they mean? 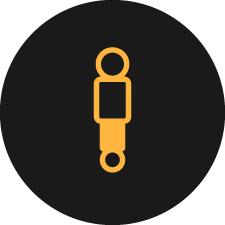 Certain cars have sophisticated dampers in their suspension system, which can be set to be softer or firmer. If you see this warning sign, then the dampers will need checking. 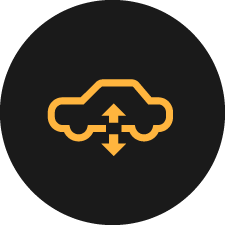 Plenty of posh cars come with air suspension systems. The appeal is that they allow drivers to tailor the driving experience, to an extent. This light can either indicate that you’ve left the air suspension in a raised setting, or there’s a glitch in the system. 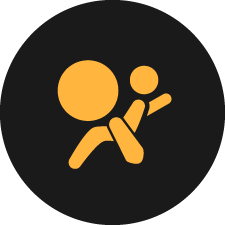 An amber airbag warning light usually signals that the front passenger side airbag has been switched off by the driver – such as when installing a rear-facing child seat in the front chair. 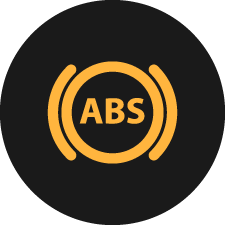 Anti-lock brakes (ABS) are one of the greatest strides in making driving safer. They allow a driver to apply maximum braking and steer at the same time, such as when trying to avoid a pedestrian stepping out into the road. If the ABS warning light comes on, it means there is a malfunction with the system, and drivers should have it investigated. 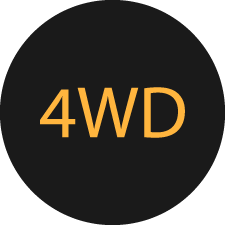 Brake pads and discs wear out. This is your handy reminder to have them serviced. 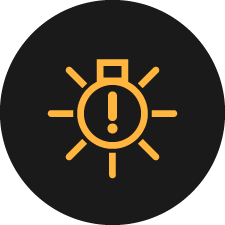 Headlamp or brake lamp bulbs fail from time to time. This helpful warning symbol will act as a challenge: do you try and replace the bulb yourself? Or pay a garage to put things right?

An increasing number of cars now offer an electronically controlled child safety lock for the back doors. It saves drivers from fiddling around with catches, and once the symbol is illuminated, it’s simply confirming that the back doors can’t be opened from inside of the car. 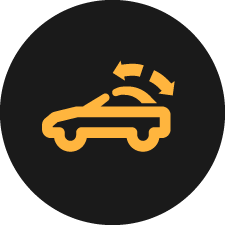 When this illuminates, it tells drivers of drop-top cars that an obstruction or more serious fault could be preventing the roof from opening or closing. 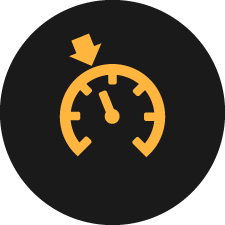 There are various types of cruise control these days, with passive versions that maintain a set speed, active systems which vary a car’s speed according to traffic conditions, and some that can even respond to changes in speed limits. The cruise control warning sign usually signifies that you’ve turned on the system. 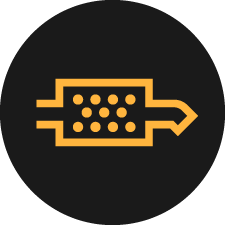 A Diesel Particulate Filter (DPF) is an essential bit of kit that captures many of the nasty toxic particles that come from burning diesel fuel. The warning light can signal that the car’s DPF needs to be cleaned out, a process which can involve taking the car on an extended high speed run. Or there may be a more serious problem, which can cause cars to fail the MOT’s emissions test. 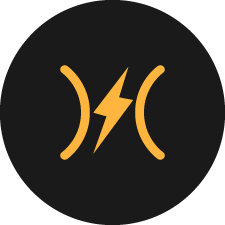 It’s dangerous to have a faulty accelerator. What if it stops sending a signal to the engine to accelerate? Or worse, it sends the wrong signal and causes unintended acceleration? So if this warning light comes on, have it investigated immediately. 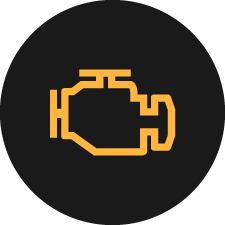 So much of a modern car is controlled by computer, and at the heart of such control systems is the engine management system. If the warning light comes on, the car will still function, but could possibly switch into what’s known as a ‘limp home’ mode with reduced performance. Have it checked out, pronto. It could indicate problems with the emissions control systems. 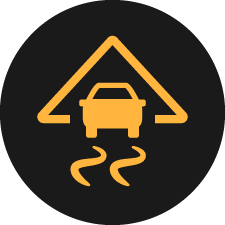 Your car’s Electronic Stability Programme (ESP, or sometimes ESC) is what keeps it securely planted on the road. It’s an important bit of kit, but sometimes drivers may turn it off. The warning symbol serves as a reminder. But if you haven’t switched it off and the light comes on, there’s a fault which requires further checks. 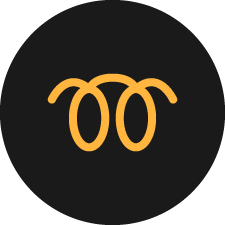 Glow plugs help start a diesel engine when it’s cold. So if you drive a diesel-powered car, you should wait for the glow plug symbol to switch off before starting the engine. However, if they come on after this, it means one of the glow plugs has a problem – common, as they wear out over time. 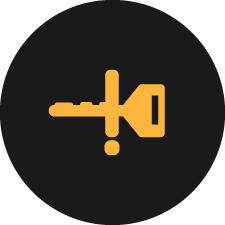 Many cars no longer need a key in the traditional sense. Instead, they use a ‘smart key’ which is meant to be more convenient. If you unlocked your car and started it, then popped back into your house, accidentally leaving your smart key on the kitchen table when you did, this is your helpful reminder not to drive off without the ‘key’. 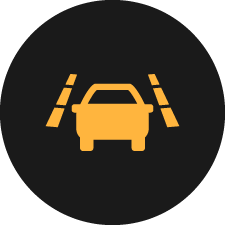 Some cars have Lane Keep Assist to help steer themselves back into the lane of a road if they detect that the vehicle is wandering too close to a white road marking or verge. This symbol indicates that the system is active. A red symbol means the system is faulty.

Every driver is likely to have seen this at least once. It means the car’s fuel tank is nearly empty and if you don’t put more fuel in, you’ll be grinding to a halt fairly soon - usually somewhere between 20 and 50 miles.

Automatic lights and windscreen wipers are becoming increasingly common on new cars. If this warning light appears, it’s telling you there’s a problem with one of them. 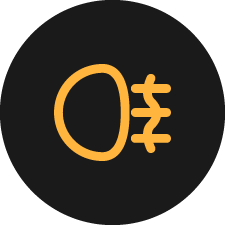 Been driving in fog, and forgotten to turn off your car’s rear foglights? That’s what this symbol is there for, reminding drivers to switch off foglights. 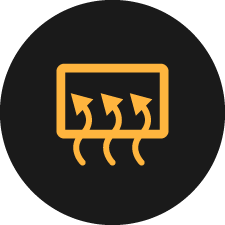 This is an easy one. It means the car’s rear windscreen heater is on. Switch it off once you can see clearly out of the back. 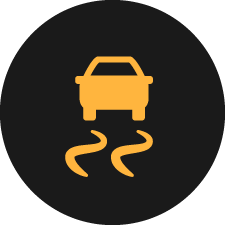 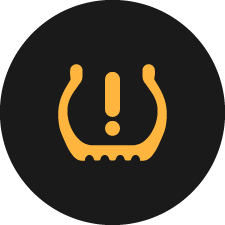 Most modern cars come with a system that keeps a watchful eye over the air pressure in the tyres. If it detects that one has fallen noticeably compared with the others, it will warn the driver. If your’e on the road, head for a petrol station and check the pressures and adjust accordingly. If your’e unsure on how to reset the tyre pressure monitor, the vehicle handbook will offer a step-by-step guide. 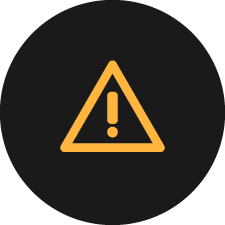 The yellow triangle with an exclamation mark will typically be accompanied by a message explaining what’s gone wrong. Hopefully it will be self-explanatory – such as a low reservoir for the windscreen washer system.

Working out your annual mileage

Looking after your car tyres

How to jump-start a car