In May 2015, the Ministry of Health first reported the presence of the Zika virus in Brazil, and since then it has spread across South America and beyond.

This map, produced by the European Centre for Disease Prevention and Control, shows the countries currently affected: 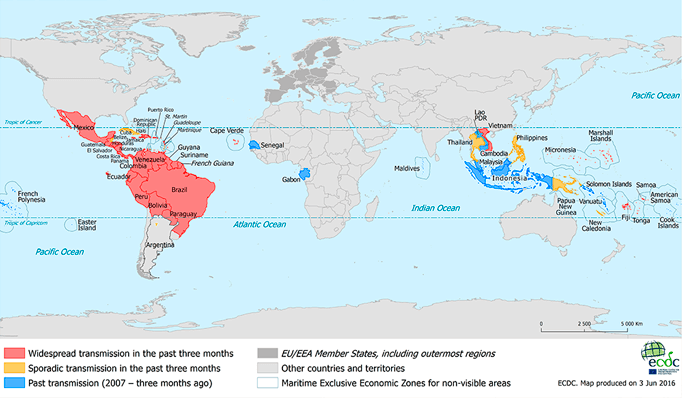 Now, the CDC has announced 14 people have been infected with the Zika virus in an area just north of downtown Miami, Florida. It’s believed the virus was contracted through local mosquitos - the first known case of this in the continental United States.

We’re going to tell you the risks, list the symptoms and give some travel advice so you can learn more about the outbreak.

Zika virus - what is it?

The Zika virus is a mosquito-transmitted infection discovered in the Zika forest in Uganda in 1947. It is quite common in Africa and Asia, but only began spreading in the Western Hemisphere following the outbreak in Brazil.

It’s related to dengue, yellow fever and the West Nile virus, and until now very few people outside of Africa and Asia had been infected. All the countries affected by Zika are listed here. This list will be kept updated, so check back regularly.

If you are pregnant, especially in your first trimester, you should avoid all travel to the Americas

Zika virus - how do you catch it?

The Zika virus is spread by the Aedes mosquito. If this especially aggressive insect drinks the blood of an infected person, it can then infect the subsequent people it bites with the virus.

These mosquitos are most active during the day, so bed nets are futile.

The virus can also be sexually transmitted by men. It’s not yet known if women can pass it on in the same way, or if it can be passed through saliva during kissing.

If a man contracts the Zika virus, he should consider using protection, or abstain from sex for at least six months. Read more about the sexual transmission of the Zika virus here.

The most devastating transmission of the Zika virus is from a pregnant woman to her foetus. If the mother is infected, the virus can be passed on to her baby during pregnancy or birth.

If you are pregnant then we strongly recommend avoiding travel to any of the infected risk areas. Read more if you’re pregnant and thinking of travelling.

Zika virus - what are the symptoms?

For most people, there’s little reason to panic about the Zika virus.

Most people that contract the virus show no symptoms; in fact, only one in five people show the following symptoms:

However, there are still risks.

Guillain-Barre syndrome, a rare nervous system disorder, has been linked to the infection and can cause temporary paralysis.

The biggest concern right now is the strong link between mothers that have contracted the virus (especially in their first trimester) and the surge of infants that have been born with microcephaly.

Zika virus - what is microcephaly?

Microcephaly is a condition where babies are born with abnormally small brains and skulls for their age, which results in varying degrees of brain damage.

The virus can be deadly for the baby if the brain is so underdeveloped it can’t regulate the functions that are needed for it to survive. The children that do survive will have developmental delays and intellectual disabilities.

In April the Centers for Disease Control and Prevention (CDC) confirmed, after carefully reviewing all the existing evidence, that Zika virus is the cause of microcephaly and other foetal brain defects.

Tom Frieden, director at the CDC, said: “It is now clear that the virus causes microcephaly. We are also launching further studies to determine whether children who have microcephaly, born to mothers infected by the Zika virus, is the tip of the iceberg of the damaging effects we could see on the brain and other developmental problems.”

Zika virus – is there a vaccination?

Unfortunately there is not a vaccination available right now, but according to the US National Institute of Health two vaccines are in development – but it’s still not entirely clear how the virus affects the body.

A bit of headway has been made though. Scientists have found a protein in the human body that has the ability to stop the spread of Zika once a person has been infected.

The protein, IFITM3, may be able to prevent the Zika virus from killing human cells, so new treatments and therapies can be developed to tackle the virus.

Once the virus is fully understood, it’ll be easier for the medical community to put a timescale on developing a vaccine or treatment. Until then, it’s still believed a vaccine could take several years.

Zika virus – will it affect the Olympic Games in Rio?

Brazil is the epicentre of the current outbreak, and it’s left people questioning whether the Olympic Games in Rio should go ahead. Many doctors have voiced concern, not only for the athletes, but also for the hundreds of thousands of spectators visiting the games.

But the World Health Organisation (WHO) said: “Based on current assessments, cancelling or changing the location of the 2016 Olympics will not significantly alter the international spread of Zika virus.

“WHO advises pregnant women not to travel to areas with ongoing Zika virus transmission. This includes Rio de Janeiro. Pregnant women’s sex partners returning from areas with circulating virus should be counselled to practise safe sex or abstain throughout the pregnancy.”

If you are visiting Rio for the Olympic Games, WHO has recommended the following precautions:

If you’re pregnant, especially in your first trimester, you should avoid all travel to South America, and don’t forget to check this page which is kept updated with all the countries and territories with confirmed cases of the Zika virus.

If you are travelling to South America (or any places where mosquitos can pass on dangerous viruses and parasites), we suggest you follow the information on this Mosquito Bite Prevention for Travellers page.

If the country you're travelling to has been affected by the Zika virus and you wish to cancel your trip, then get in touch with your tour operator or transport provider. They might be able to offer a refund or exchange for an alternative holiday destination.

If one of your party is pregnant, and you booked your trip before the affected destination was announced on the FCO website, then Direct Line will consider covering your cancellation.